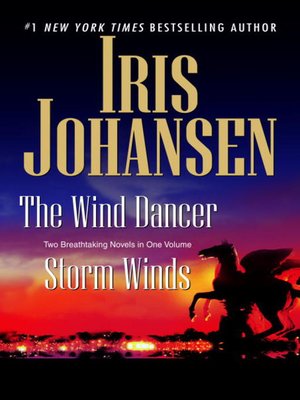 Twice the thrills--in one captivating volume

Published together for the first time, from #1 New York Times best-selling author Iris Johansen comes a gripping pair of historical thrillers that push the boundaries of intrigue, suspense, and danger.

The Wind Dancer
In Renaissance Italy, intrigue is as intricate as carved cathedral doors, but none is so captivating as that surrounding the prized Wind Dancer, the lost treasure of a family--and of the man who will stop at nothing to reclaim it. Lionello Andreas is bound by his vow to guard the exquisite statue. But to recover what is rightfully his, he will need the help of a thief--one he can control body and soul. He finds his answer on the treacherous backstreets of Florence, in a sharp-witted young woman whose poverty leaves her no choice. But in the end, the allure of the Wind Dancer, and the ruthlessness of those who would possess her, will catapult them both into a terrifying realm where death may be the most merciful escape.

Storm Winds
Jean Marc Andreas wanted what was rightfully his--and would use any means to get it. Juliette de Clement, a confidante of the royal family, could aid his search for the treasure so many had killed to possess...and died to protect. But in the treacherous world of eighteenth-century revolutionary France, death could come from any direction--none more likely than from the person you trusted most. Still, Jean and Juliette had no choice but to trust each other. Their lives depended on it. Someone else was determined to have the Wind Dancer statue, and the legacy it bestowed. Someone whose twisted genius was already wrecking a path of unspeakable violence.

More about Iris Johansen
The Wind Dancer/Storm Winds
Copy and paste the code into your website.
New here? Learn how to read digital books for free