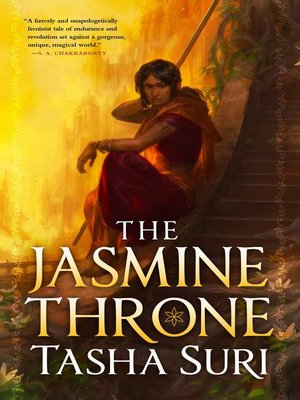 View more libraries...
WINNER OF THE WORLD FANTASY AWARD FOR BEST NOVEL
NAMED ONE OF THE BEST BOOKS OF 2021 BY PUBLISHERS WEEKLY, LIBRARY JOURNAL, BOOKLIST, AND THE NEW YORK PUBLIC LIBRARY
A ruthless princess and a powerful priestess come together to rewrite the fate of an empire in this “fiercely and unapologetically feminist tale of endurance and revolution set against a gorgeous, unique magical world” (S. A. Chakraborty, author of the The City of Brass).
Exiled by her despotic brother, princess Malini spends her days dreaming of vengeance while imprisoned in the Hirana: an ancient cliffside temple that was once the revered source of the magical deathless waters but is now little more than a decaying ruin.

The secrets of the Hirana call to Priya. But in order to keep the truth of her past safely hidden, she works as a servant in the loathed regent’s household and cleaning Malini’s chambers.

When Malini witnesses Priya’s true nature, their destinies become irrevocably tangled. One is a ruthless princess seeking to steal a throne. The other a powerful priestess desperate to save her family. Together, they will set an empire ablaze.
Praise for The Jasmine Throne:
"Suri’s writing always brings me to another world; one full of wonders and terrors, where every detail feels intricately and carefully imagined." —R. F. Kuang, author of Babel
"Raises the bar for what epic fantasy should be." —Chloe Gong, author of These Violent Delights
"An intimate, complex, magical study of empire and the people caught in its bloody teeth. I loved it.” —Alix E. Harrow, author of The Once and Future Witches
"Suri’s incandescent feminist masterpiece hits like a steel fist inside a velvet glove. Simply magnificent." —Shelley Parker-Chan, author of She Who Became the Sun
"A fierce, heart-wrenching exploration of the value and danger of love in a world of politics and power." —Publishers Weekly (starred review)
"Lush and stunning....Inspired by Indian epics, this sapphic fantasy will rip your heart out." —BuzzFeed News