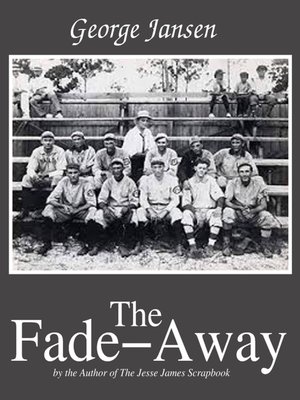 It is Friday, April 13, 1900, and Port Newton, a small California town on San Francisco Bay, is down on its luck. Times have been changing and fewer and fewer of the big grain ships take on their cargo there. Worse, Old Man Newton, himself, embezzled money from his own savings and loan, and its doors have been padlocked by order of the court. Port Newton's down-and-out citizens still have their own baseball team, as does every little town around the Bay, but the younger more athletic men have mostly emigrated to more prosperous climes. The team has become a laughingstock, but on that fateful fogbound Friday night, Constable "Long John" Sheets fishes a six foot tall American Indian, wearing a tuxedo, out of the chill waters of the Bay. Sheets and the boys at Foghorn Murphy's Railroad Exchange Saloon, having nothing better to do with the unconscious man, lay him out on Murphy's mahogany bar where he sleeps until, days later, he is awakened by the kiss of a maiden. The Fade-Away is a tale of love, greed, and America's descent into modernity.