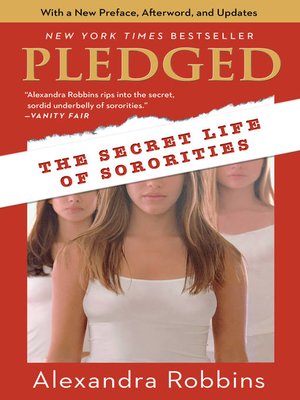 The Secret Life of Sororities

SociologyWomen's StudiesNonfiction
2015 Edition: With a New Preface, Afterword, and Updates.

"Alexandra Robbins rips into the secret, sordid underbelly of sororities."—Vanity Fair
Updated ten years after it is original publication, Pledged by Alexandra Robbins is as timely today as it was when first published. With salacious breaking news about fraternities and sororities shocking the general public (and members themselves) Pledged exposes what really goes on behind the facades of some of these Greek organizations. Robbins, an investigative journalist, went undercover as a sorority sister; her expose is a breathtaking narrative of tumultuous breakups, fights, drunk driving, stalkers, cover-ups, predation by faculty and staff, theft, rape, and an abundance of drugs and alcohol, and much, much more.
SociologyWomen's StudiesNonfiction

Alexandra Robbins is the author of four New York Times bestsellers, one of which was voted Goodreads' Best Nonfiction Book of the Year. Her work has appeared in The New York Times, The New Yorker, Vanity Fair, The Atlantic, The Washington Post, an...

More about Alexandra Robbins
Pledged
Copy and paste the code into your website.
New here? Learn how to read digital books for free