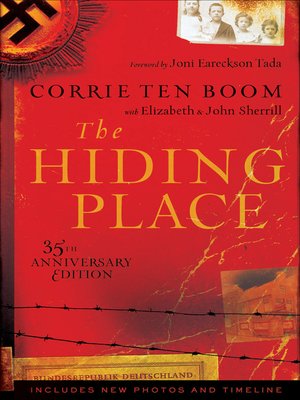 Elizabeth Sherrill (www.elizabethsherrill.com) and her husband, John, coauthored numerous bestsellers—classics such as The Hiding Place, The Cross and the Switchblade, and God's Smuggler. They were associated with Guideposts magazine for many year...

John Sherrill (1923-2017) and his wife, Elizabeth, co-authored numerous bestsellers—classics such as The Hiding Place, The Cross and the Switchblade and God's Smuggler—and traveled the world researching and writing articles and books. Longtime edi...

Corrie ten Boom (1892-1983) endured 10 months in Ravensbruck concentration camp for hiding Jews in her family's home in Holland. After her release at age 52, Corrie spoke around the world and wrote more than 10 books, including the bestselling The...

The Hiding Place
Copy and paste the code into your website.
New here? Learn how to read digital books for free