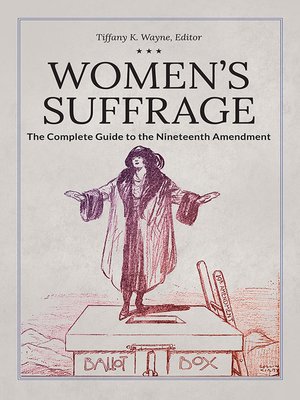 This is the "everything" women's suffrage and 19th Amendment book, coming just as the country celebrates the centenary of the constitutional amendment that finally brought the vote to all American women.

Women's Suffrage: The Complete Guide to the Nineteenth Amendment tells the dramatic story of American women's long fight for the vote and passage of the nineteenth amendment to the U.S. Constitution. A veritable library on all things to do with suffrage and the nineteenth amendment, this reference tells the heroic stories of suffragists and brings to life the ideas and deeds of the organizations that made suffrage possible. Along the way, the book delves into less well-known stories, like the experiences of African American women during the fight for suffrage, the role of labor in the suffrage movement, and the special role of Western states in the fight for voting equality.

The material analyzes key moments in the suffrage fight. A comprehensive document section brings to life the arguments for and against suffrage. Included among many primary sources are Jane Addams's provocative "If Men Were Seeking the Franchise," Carrie Chapman Catt's "Address to Congress on Women's Suffrage" (1917), pamphlet of 1915, and many more speeches, legislation, and documents of all types.