The Big Life of Little Richard 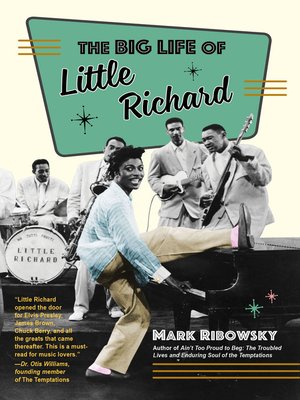 Richard Wayne Penniman, known to the world as Little Richard, blazed the trail for generations of musicians: The Beatles, James Brown, the Everly Brothers, Jimi Hendrix, the Rolling Stones, Elton John, Prince . . . the list seems endless. He was "The Originator," "The Innovator," and the self-anointed "King and Queen of Rock 'n' Roll." In The Big Life of Little Richard, Mark Ribowsky shares the raucous story of his life from early childhood in Macon, Georgia, to his death in 2020.

Ribowsky, acclaimed biographer of musical icons―including the Supremes, the Temptations, Stevie Wonder, and Otis Redding―takes readers through venues, gigs, and studios, conveying the sweaty energy of music sessions limited to a few tracks on an Ampex tape machine and vocals sung along with a live band. He explores Little Richard's musicianship; his family life; his uphill battle against racism; his interactions with famous contemporaries and the media; and his lifelong inner conflict between his religion and his sexuality.

By 2020, eighty-seven-year-old Little Richard's electrifying smile was still intact, as were his bona fides as rock's royal architect: the '50s defined his reign, and he extended elder statesmanship ever since. The Big Life of Little Richard not only explores a legendary stage persona, but also a complex life under the makeup and pomade