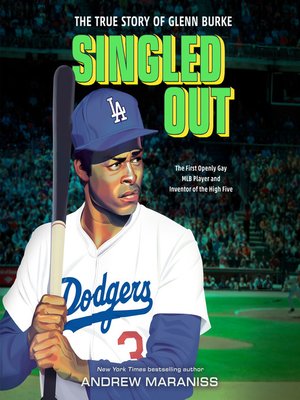 View more libraries...
*"[An] excellent exercise in narrative nonfiction." —Booklist (starred review)
From New York Times bestselling author Andrew Maraniss comes the remarkable true story of Glenn Burke, a "hidden figure" in the history of sports: the inventor of the high five and the first openly gay MLB player. Perfect for fans of Steve Sheinkin and Daniel James Brown.
On October 2nd, 1977, Glenn Burke, outfielder for the Los Angeles Dodgers, made history without even swinging a bat. When his teammate Dusty Baker hit a historic home run, Glenn enthusiastically congratulated him with the first ever high five.
But Glenn also made history in another way—he was the first openly gay MLB player. While he did not come out publicly until after his playing days were over, Glenn's sexuality was known to his teammates, family, and friends. His MLB career would be cut short after only three years, but his legacy and impact on the athletic and LGBTQIA+ community would resonate for years to come.
New York Times bestselling author Andrew Maraniss tells the story of Glenn Burke: from his childhood growing up in Oakland, his journey to the MLB and the World Series, the joy in discovering who he really was, to more difficult times: facing injury, addiction, and the AIDS epidemic.
Thoroughly researched and packed with never-before-seen details about Glenn's life, Singled Out is the fascinating story of a trailblazer in sports—and the history and culture that shaped the world around him.