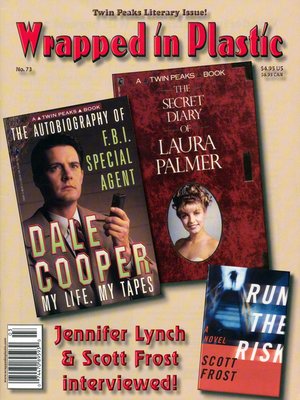 (Mar. 2005) - Two great interviews in this Literary Issue! Lengthy Jennifer Lynch discussion covers her work on the New York Times bestseller The Secret Diary of Laura Palmer and Boxing Helena! Scott Frost talks about the two episodes of Twin Peaks that he wrote, plus The Autobiography of Dale Cooper: My Life, My Tapes and Diane...The Twin Peaks Tapes of Agent Cooper, plus his new novel Run the Risk! Also in this issue: rare magazine covers from Holland featuring Madchen Amick, Sherilyn Fenn, Lara Flynn Boyle, and others (some in full color); and updates about TP actors in magazine and television appearances!