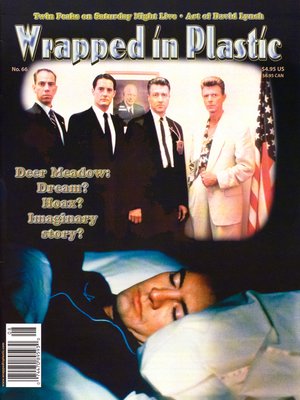 (Aug. 2003) - Twin Peaks outside of Twin Peaks! Comprehensive reports (with numerous photos) of the two major Twin Peaks-related television events outside the show itself back in 1990: the September 29 episode of Saturday Night Live hosted by Kyle MacLachlan (featuring a spectacular Peaks parody that included appearances by Mike Myers, Chris Farley, Phil Hartman, Conan O'Brien, Kevin Nealon, and others); and the May 21 episode of The Phil Donahue Show in which much of the cast, plus producer Mark Frost, appeared as guests for the entire hour! Also in this issue: The Japanese Twin Peaks Card Game (part one); "Dark Passages: The Art of David Lynch"; a debate on whether the Deer Meadow segment of Fire Walk With Me is a dream; letters; and a "World Spins" news section!