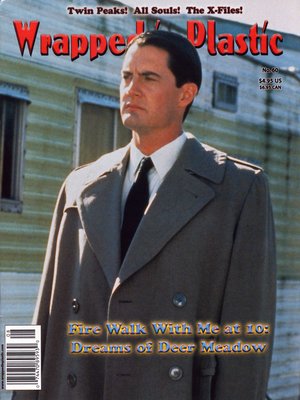 (Aug. 2002) - On the tenth anniversary of Twin Peaks: Fire Walk With Me, this issue features an all-new, 10-page essay that proposes a way to interpret the film as a cohesive work in which the Deer Meadow prologue is fully integrated into the entirety of the film! Plus: a detailed episode guide to Mark Frost's short-lived All Souls TV show; a brief interview with David Lynch's Blue Bob CD collaborator John Neff; a huge letters column; and some X-Files news. Wraparound cover photo from FWWM!