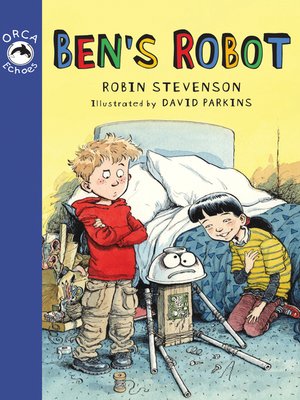 Seven-year-old Ben loves pretending to be a robot, but his best friend Jessy is tired of being ordered to oil his knee joints and check his batteries. She says the robot game is boring and runs off to play with someone else. So Ben decides to build a real robot instead. He's built all kinds of things before: wind generators, solar-powered marble launchers, pinball machines. But none of his creations have ever really worked. Until now. When his robot begins talking, Ben is thrilled. However, nothing goes quite the way he thinks it will. Ben's robot is rather difficult to get along with. He complains a lot. He's bossy. He never wants to do anything Ben suggests. Having a real robot isn't nearly as much fun as Ben thought it would be. And to make things worse, no one — not even Jessy — will believe him.

Robin Stevenson is the author of more than twenty-five books for kids and teens, including The Summer We Saved the Bees and Pride Colors. The first edition of her nonfiction book Pride: Celebrating Diversity & Community (2016) won a Stonewall Hono...

More about Robin Stevenson
Ben's Robot
Copy and paste the code into your website.
New here? Learn how to read digital books for free