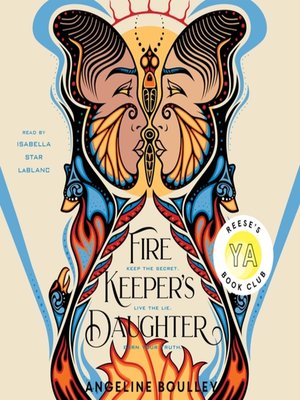 "Isabella Star LaBlanc brings an authentic-sounding narration to this powerful audiobook...Dialogue, including words in other languages, is handled with effortless transitions and clear depictions between characters. This audiobook should not be missed." — AudioFile Magazine, Earphones Award winner
A REESE WITHERSPOON x HELLO SUNSHINE BOOK CLUB YA PICK
An Instant #1 New York Times Bestseller

Soon to be adapted at Netflix for TV with President Barack Obama and Michelle Obama's production company, Higher Ground.
"One of this year's most buzzed about young adult novels." —Good Morning America

For fans of Angie Thomas and Tommy Orange, Angeline Boulley's debut novel, Firekeeper's Daughter, is a groundbreaking YA thriller about a Native teen who must root out the corruption in her community.
Eighteen-year-old Daunis Fontaine has never quite fit in, both in her hometown and on the nearby Ojibwe reservation. She dreams of a fresh start at college, but when family tragedy strikes, Daunis puts her future on hold to look after her fragile mother. The only bright spot is meeting Jamie, the charming new recruit on her brother Levi's hockey team.
Yet even as Daunis falls for Jamie, she senses the dashing hockey star is hiding something. Everything comes to light when Daunis witnesses a shocking murder, thrusting her into an FBI investigation of a lethal new drug.
Reluctantly, Daunis agrees to go undercover, drawing on her knowledge of chemistry and Ojibwe traditional medicine to track down the source. But the search for truth is more complicated than Daunis imagined, exposing secrets and old scars. At the same time, she grows concerned with an investigation that seems more focused on punishing the offenders than protecting the victims.
Now, as the deceptions—and deaths—keep growing, Daunis must learn what it means to be a strong Anishinaabe kwe (Ojibwe woman) and how far she'll go for her community, even if it tears apart the only world she's ever known.
A 2021 Kids' Indie Next List Selection
An Amazon Best Book of the Month for March Selection
An Entertainment Weekly Most Anticipated Books of 2021 Selection
A PopSugar Best March 2021 YA Book Selection
A Macmillan Audio production from Henry Holt and Company
"The text is filled with Ojibwe phrases and traditions that Native American reader LaBlanc (Sisseton-Wahpeton Dakota) handles with ease. Her voice is young and earnest and her fluency adds to the portrayal of Daunis...It's a tale filled with suspense, and LaBlanc's sensitive reading will keep listeners plugged in." — Booklist, starred review
"Expert narration from Isabella Star LeBlanc, a Sisseton Wahpeton Dakota, brings authenticity to Daunis's joy, anger, fear, and grief while providing distinct voices for the supporting cast, including the tribal elders. LeBlanc's captivating voice draws readers in, expressing every mundane, sweet, heartbreaking, and life-threatening moment." — School Library Journal, starred review