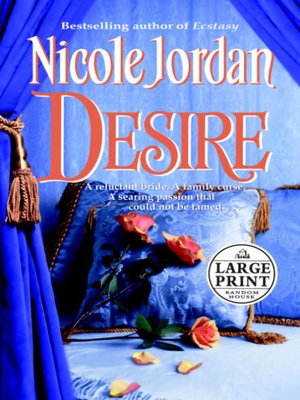 Seducing readers with her scorching sensuality and searing romance, bestselling author Nicole Jordan weaves her most tantalizing love story yet. . . .

A legendary lover and spymaster, the darkly sensual Earl of Wycliff eludes matrimony until a brush with death makes him yearn for a son to carry on his name. The moment Lucian spies the alluring Brynn Caldwell on a Cornish beach, he knows he has found the woman he wants for his bride.

Brynn believes the notorious rake's fascination with her is driven by a centuries-old curse that dooms the women of her family to tempt men--only to lead those they love to their death. Compelled by dire circumstances to marry Lucian, Brynn surrenders her body to his caresses but dares not give him her heart.

Locked in a battle of wills with his bewitching wife, Lucian begins to suspect that Brynn is a traitor. Before long he finds himself lured into a web of danger and betrayal, where the price of winning his bride's elusive heart may be his own life.

Nicole Jordan is the nationally bestselling author of fifteen historical romances. She recently moved with her real-life hero to the Rocky Mountains of Utah, where she is at work on the next book of her scorching Notorious series--tales of dangero...

More about Nicole Jordan
Desire
Copy and paste the code into your website.
New here? Learn how to read digital books for free