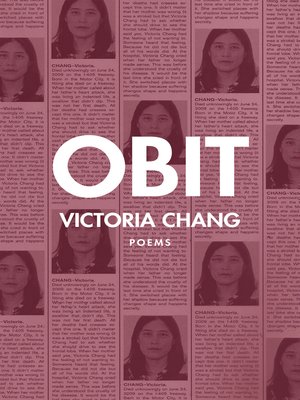 View more libraries...
The New York Times 100 Notable Books of 2020
Time Magazine's 100 Must-Read Books of 2020
NPR's Best Books of 2020
National Book Award in Poetry, Longlist
Frank Sanchez Book Award
After her mother died, poet Victoria Chang refused to write elegies. Rather, she distilled her grief during a feverish two weeks by writing scores of poetic obituaries for all she lost in the world. In Obit, Chang writes of "the way memory gets up after someone has died and starts walking." These poems reinvent the form of newspaper obituary to both name what has died ("civility," "language," "the future," "Mother's blue dress") and the cultural impact of death on the living. Whereas elegy attempts to immortalize the dead, an obituary expresses loss, and the love for the dead becomes a conduit for self-expression. In this unflinching and lyrical book, Chang meets her grief and creates a powerful testament for the living.
"When you lose someone you love, the world doesn't stop to let you mourn. Nor does it allow you to linger as you learn to live with a gaping hole in your heart. Indeed, this daily indifference to being left behind epitomizes the unique pain of grieving. Victoria Chang captures this visceral, heart-stopping ache in Obit, the book of poetry she wrote after the death of her mother. Although Chang initially balked at writing an obituary, she soon found herself writing eulogies for the small losses that preceded and followed her mother's death, each one an ode to her mother's life and influence. Chang also thoughtfully examines how she will be remembered by her own children in time."—Time Magazine