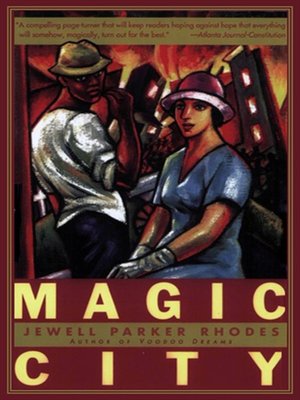 Tulsa, Oklahoma, 1921. A white woman and a black man are alone in an elevator. Suddenly, the woman screams, the man runs out, and the chase to capture and lynch him begins.

When Joe, a young man trying to be the next Houdini, is accused of rape, he must perform his greatest escape by eluding a bloodthirsty lynch mob. And Mary, the motherless daughter of a farmer who tries to marry her off to the farmhand who viciously raped her, must find the courage to help exonerate the man she had accused with her panicked cry. Based on true events, Magic City is a portrait of an era, climaxing in the heroic but doomed stand that pitted the National Guard against a small band of black men determined to defend the town they had built into the "Negro Wall Street."

Named by the Chicago Tribune as a Favorite Book of 1997

Jewell Parker Rhodes is the recipient of a Yaddo Creative Writing Fellowship and the National Endowment of the Arts Award in Fiction. She is professor of creative writing and American literature and Director of the M.F.A. program in creative writi...

More about Jewell Parker Rhodes
Magic City
Copy and paste the code into your website.
New here? Learn how to read digital books for free