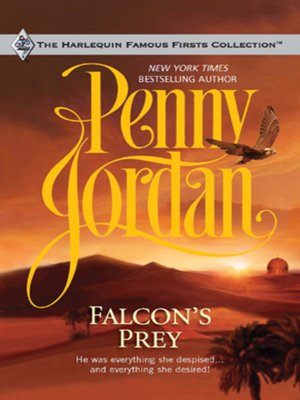 Englishwoman Felicia Gordon should be floating on air. After all, she's engaged to a man who is kind, charming, considerate.... But he doesn't inspire the least amount of passion in her blood.

It isn't until Felicia flies to Kuwait to meet her fiancé's family that she finds the electricity she's been missing--in her fiancé's uncle, Sheikh Raschid al Hamid al Sabah! Raschid is hardly the "uncle" she imagined--tall, powerful, unnervingly masculine and shockingly arrogant. But beneath Raschid's contempt lies a passion that burns hotter than the desert sun, a fire Felicia never knew she craved...until now.

More about Penny Jordan
Falcon's Prey
Copy and paste the code into your website.
New here? Learn how to read digital books for free