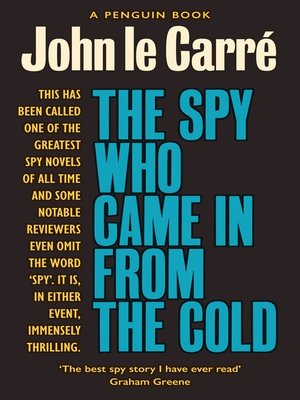 The Spy Who Came in from the Cold

Alex Leamas is tired. It's the 1960s, he's been out in the cold for years, spying in Berlin for his British masters, and has seen too many good agents murdered for their troubles. Now Control wants to bring him in at last - but only after one final assignment.

He must travel deep into the heart of Communist Germany and betray his country, a job that he will do with his usual cynical professionalism. But when George Smiley tries to help a young woman Leamas has befriended, Leamas's mission may prove to be the worst thing he could ever have done.

In le Carré's breakthrough work of 1963, the spy story is reborn as a gritty and terrible tale of men who are caught up in politics beyond their imagining. With a new introduction by William Boyd and an afterword by Le Carré himself.

John le Carré was born in 1931 and attended the universities of Bern and Oxford. He taught at Eton and served in British Intelligence during the Cold War. For more than fifty years he has lived by his pen. He divides his time between London and Co...

William Boyd was born in 1952 in Accra, Ghana, and grew up there and in Nigeria. He is the author of fifteen highly acclaimed, bestselling novels and five collections of stories. He is married and divides his time between London and south-west Fra...

More about William Boyd
The Spy Who Came in from the Cold
Copy and paste the code into your website.
New here? Learn how to read digital books for free