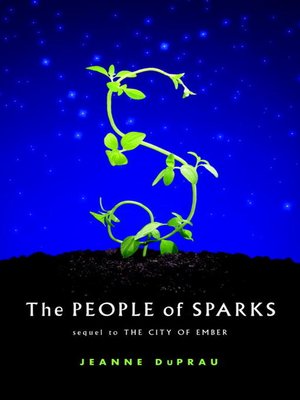 The People of Sparks

Juvenile FictionScience Fiction
A modern-day classic. This highly acclaimed adventure series about two friends desperate to save their doomed city has captivated kids and teachers alike for almost fifteen years and has sold over 3.5 MILLION copies!

Lina and Doon have led the citizens of Ember to an exciting new world. When they discover a village called Sparks, they are welcomed, fed, and given places to sleep. But the town's resources are limited and it isn't long before resentment begins to grow between the two groups. When mysterious acts of vandalism cause tempers to erupt, putting everyone's lives in danger, it's up to our two heroes to find the courage to stop the conflict and bring peace.

Praise for the City of Ember books:

"While Ember is colorless and dark, the book itself is rich with description." —VOYA, Starred
Juvenile FictionScience Fiction

More about Jeanne DuPrau
The People of Sparks
Copy and paste the code into your website.
New here? Learn how to read digital books for free