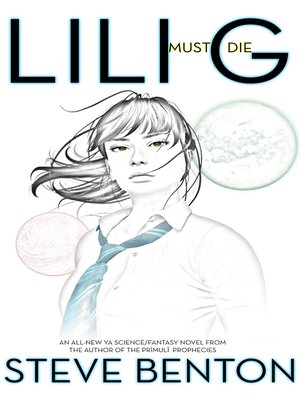 29th century Azul: a shiny, new home for the ancestors of refugees from Earth, known as a dead world.

But Earth is not as dead as most believe.

Lili Gunnarsson is an orphan, secretly from a feudal society on a restored and hidden Earth. Recently adopted into the famous Gunnarsson clan, she can do things no other Azulian child can. She can change someone's sensibilities with a mere touch. She can teleport to any place on her new world. She can even levitate a 200-kilogram stone table and drop it on one's head if she desires. And eventually, she will horridly transform into a savage beast on every full moon.

Now, Lili is perfectly fine with her abilities (and the accompanying limitations), willingly keeping them secret while she attends classes for the 2821-2822 school year at Saint Mary's Academy, in Córdoba, Nueva Argentina, under the name Lili Gatto. Accompanied by her best friends, fraternal twins Tommy and Janie Williams, native Alaskans also from Earth, Lili navigates the intricacies of a scholastic social environment completely alien to her. From her nasty English teacher, Miss Hernandez, to the twisted little fans of the R.I.P. Ryder Johnson Fan Club, a group dedicated to the memory and supposed genius of a traitorous murderer, Lili encounters many obstacles in her quest to pose as a normal girl and get an excellent education in the institution where her adoptive father studied.

Lili has a genetic-level aversion to these creatures, like her adoptive parents, being a hybrid of the lycanthrope enhanced subspecies and of the Prīmulī, the immortal beings that created humanity. And, despite warnings from her parents, her aunt and her uncle (the latter of which happens to be the Primulus historically known as Michael the Archangel), Lili sets out to eliminate these foul beings from the face of the planet.

Without getting caught and grounded for life, that is.

However, Lili has no idea that rogue, banished Prīmulī, known as the Grigori, are scheming to have her killed, or that it is they who are behind the Magister reactivation. The Grigori, led by Michael's borderline insane sister, Anaita, consider Lili to be a genetic monstrosity, and also fear the power she will one day possess: power that will eclipse theirs, like an ocean over a babbling brook. Anaita's minion, Azael, poses as Saint Mary's custodian, Mr. Wallace, assisting the crazed Primulus in her scheme to eliminate Homo Sapiens from the face of the universe. Unable to physically harm Lili due to Michael's protective influences, Azael appears to be the one who is turning prominent Córdoba citizens into vampires in order to terminate the girl's existence. But he holds a dangerous secret close to his heart: a secret that could mean the end of his own eons-long existence.

* "Your Primulus universe is, to me, the ultimate cross over."
* "I must say, I am very disappointed! VERY DISAPPOINTED THAT I COULD NOT PUT THIS BOOK DOWN FOR ONE FREAKING MINUTE UNTIL I HAD READ, AND IN SOME CASES RE-READ EVERY SINGLE PAGE!"
* "My head is still spinning. It's the kind of book you can't wait to re-read!"
* "A wonderful gripping story, I can see as many adults as YA reading this and loving it."
* "You weave all these various genres together more effectively than any modern author I...

More about Steve Benton
Lili G Must Die
Copy and paste the code into your website.
New here? Learn how to read digital books for free