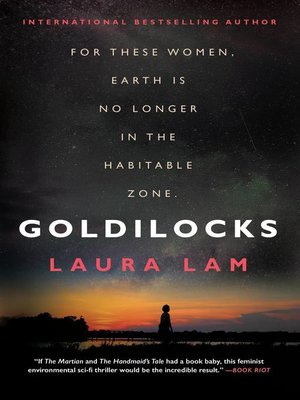 A gripping science fiction thriller where five women task themselves with ensuring the survival of the human race; perfect for readers of The Martian, The Power, and Station Eleven.

Despite increasing restrictions on the freedoms of women on Earth, Valerie Black is spearheading the first all-female mission to a planet in the Goldilocks Zone, where conditions are just right for human habitation.

It's humanity's last hope for survival, and Naomi, Valerie's surrogate daughter and the ship's botanist, has been waiting her whole life for an opportunity like this - to step out of Valerie's shadow and really make a difference.

But when things start going wrong on the ship, Naomi begins to suspect that someone on board is concealing a terrible secret - and realizes time for life on Earth may be running out faster than they feared . . .

Goldilocks is The Handmaid's Tale meets The Martian - a bold and thought-provoking new high-concept thriller.

Goldilocks
Copy and paste the code into your website.
New here? Learn how to read digital books for free