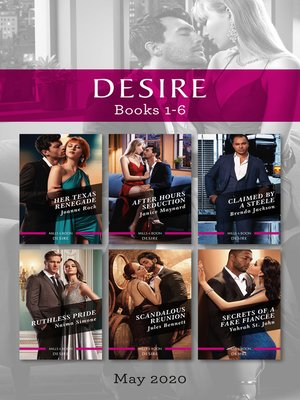 When wealthy widow and business owner Miranda Dupree needs a security expert, there's only one person for the job — her ex, bad boy hacker Kai Maddox. It's all business until passions reignite, but will her old flame burn her a second time?

When billionaire CEO Quinten Stone is injured, he reluctantly accepts live-in help at his remote home from assistant Katie Duncan — who he had a passionate affair with years earlier. Soon he's fighting his desire for the off-limits beauty as secrets from their past resurface...

Claimed By A Steele - Brenda Jackson

When it comes to settling down, playboy CEO Gannon Steele has a ten-year plan. And it doesn't include journalist Delphine Ryland. So why is he inviting her on a cross-country trip? Especially since their red-hot attraction threatens to do away with all his good intentions...

Putting family first, CEO Joshua Lowell abandoned his dreams to save his father's empire. When journalist Sophie Armstrong uncovers a shocking secret, he'll do everything in his power to shield his family from another scandal. But wanting her is a complication he didn't foresee...

Financially blackmailed attorney Maty Taylor must persuade her ex, Sam Hawkins, to sell his beloved distillery to his enemy. His refusal does nothing to quiet the passion between Maty and Sam. When powerful secrets are revealed, can their second chance survive?

Rejected by the family she wants to know, Morgan Stewart accepts Jared Robinson's proposal to pose as his fiancée to appease his own family. But when their fake engagement uncovers real passion, can Morgan have what she's always wanted, or will a vicious rumour derail everything?

Mills & Boon Desire — Luxury, scandal, desire — welcome to the lives of the elite.