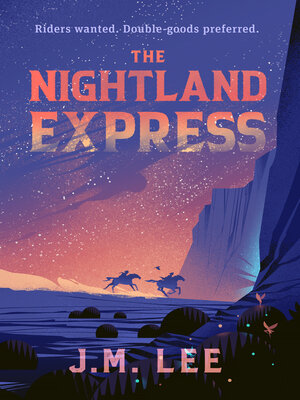 View more libraries...
In antebellum America, two teens bury their secrets and join the historic Pony Express, soon discovering that the mortal world is not the only one on the brink of war.
When bright, brash Jessamine Murphy finds a recruitment poster for the Pony Express, her tomboy heart skips a beat: not only for adventure, but for the chance to track down her wayward father in California. Eager to reunite her fractured family, Jessamine cuts her hair, dons a pair of trousers, and steps into the world as Jesse.
With a bit of trickery, Jesse wins a special assignment—as does Ben Foley, a quiet but determined boy who guards secrets as closely as Jesse does. The two are to transport unusual cargo along an unusual route: the Nightland Express. They ride west together, one excitedly navigating the world as a boy, the other passing as white to escape the monsters from his past.
Ben and Jesse soon realize their assignment is special in more ways than one: their tireless horses cover ground faster than should be possible, and inhuman creatures watch their journey from the darkness. The Nightland Express is more than a mail route—it traces the border between the mortal world and a vibrant, magical land just beyond.
As both realms hover on the precipice of disaster, Jesse and Ben must learn to fully trust one another before a catastrophic rift separates the two worlds—and the two riders—forever.