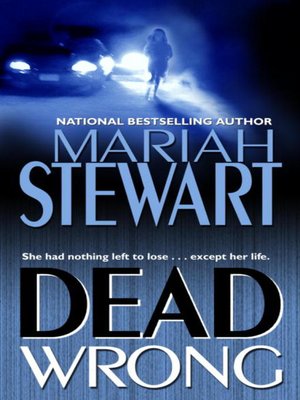 FictionRomanceSuspenseThriller
From New York Times bestselling author Mariah Stewart comes a novel of sexy romantic suspense for fans of Nora Roberts, Catherine Coulter, and Karen Robards.
"Mariah Stewart is fast becoming a brand-name author."—Romantic Times
Three devious prisoners vow murderous revenge. Now the first is free.
It was inescapably chilling, as if the murderer was methodically working his way down a page torn from the phone book. The three victims brutally killed in their own homes had one thing in common: they were all listed as M. Douglas. The fact that Mara Douglas is next on the list has her jumping at shadows, until FBI agent Aidan Shields shows up to make sure she doesn't become the fourth victim.
Aidan has been out of commission since an undercover operation went bad more than a year ago. Back on the job, his razor-sharp instincts are returning. But it will take all of Aidan's wits to stay one step ahead of the elusive killer who has engaged him in a deadly game—a game in which Mara's life is the prize. A game only one can win . . .
BONUS: This edition includes an excerpt from Mariah Stewart's Dead Certain.
FictionRomanceSuspenseThriller

Mariah Stewart is the bestselling author of numerous novels and several novellas. A RITA finalist for romantic suspense, she is the recipient of the Award of Excellence for contemporary romance, a RIO (Reviewers International) Awards honoring exce...

More about Mariah Stewart
Dead Wrong
Copy and paste the code into your website.
New here? Learn how to read digital books for free