A Hole in the Sky 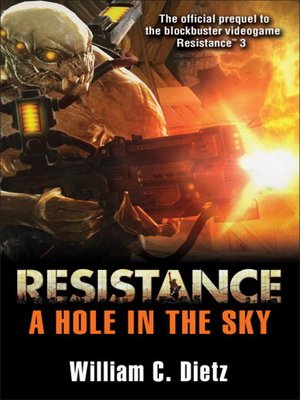 In this official prequel to Resistance 3, prospects are not looking up for planet Earth or Lieutenant Joseph Capelli. With the Chimera invasion in full swing, America has crumbled under the fierce alien juggernaut, its defenses overrun, millions dead, the rest left to fend for themselves. Many try to avoid the alien virus that turns humans into Chimeran killing machines.
Capelli may be a pariah to the army for killing hero Nathan Hale, but he is still a patriot fighting to save the country and its citizens. However, some soldiers are ready to shoot him on sight—not to mention that Hale's beautiful sister has every reason in the world to want him stone dead. But Capelli's used to being in dangerous situations and taking crazy risks. And the next move he intends to make is pure suicide.
From the Paperback edition.

Fiction Horror Science Fiction
A Hole in the Sky