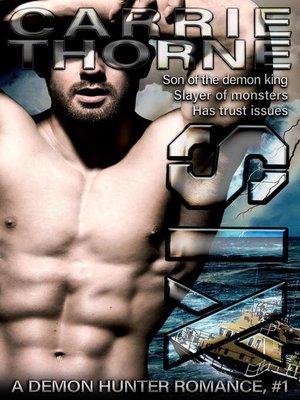 Terrible conditions, yeah, he'd expected that. Rocky outcrops, fierce winds, unpredictable currents... Flights of sharp and awkwardly angled stairs. Darkness. Finally, a beautiful but vicious monster with squiddy, hydra-style arms, and a shriek that pierces directly into your brain. Oh yeah, and she's determined to blast apart the veil between our world and the realm of demons, thereby unleashing thousands of monsters that would inevitably wipe out life as we know it. As nightmarish as one could imagine.

Demon hunting isn't just Quinn Fischer's job, but her birthright. With her plucky team at her side, she's ready to take on anything fate may throw at them. Until one recon mission doesn't go so hot...

Ryan Hunt is a burned-out demon hunter with a violent past. Thanks to a clever captain's response to a growing threat around the Bering Sea, he finds a way to use his skills on a top-secret Coast Guard crew assigned to protect the waters around Alaska.

When Quinn splashes into the Arctic just off of USCG Cutter Valkyrie's bow, Ryan knows exactly what she is, and why he shouldn't trust her. Unfortunately for Quinn, she doesn't have a clue who she is, but she knows the chemistry with Ryan is off the charts. Who gets amnesia anyway? Such a cliché.

Fate, destiny, coincidence... whatever nonsense brought them together just might tear them apart. Start reading today; this paranormal romance series will leave you deliciously satisfied... and eager for more.

More about Carrie Thorne
Six
Copy and paste the code into your website.
New here? Learn how to read digital books for free