Blow the Roof Off! 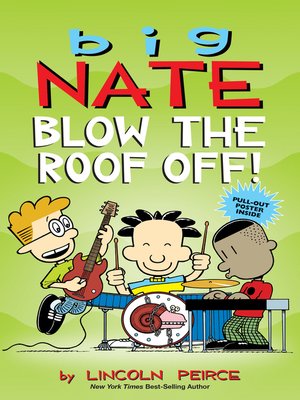 View more libraries...
Now an animated series with Paramount+ and Nickelodeon!
Bestselling author Lincoln Peirce takes readers on a hilarious, romantic, rock-and-roll adventure in Big Nate: Blow the Roof Off!
Nate Wright is born to be wild! And when Enslave the Mollusk is invited to play at the P.S. 38 annual open house, he and his bandmates are on the stairway to heaven. While the kids rock, the school year rolls on. Mrs. Godfrey is back in black, Gina thinks she's hot stuff, and Coach John is dazed and confused.
The good news: Nate's finally reunited with Trudy, his summer crush. But when he finds out she's a—gulp—seventh grader, will Nate lose that lovin' feeling? Middle school is a long, strange trip, and this collection of riotous Big Nate comics just might BLOW THE ROOF OFF!