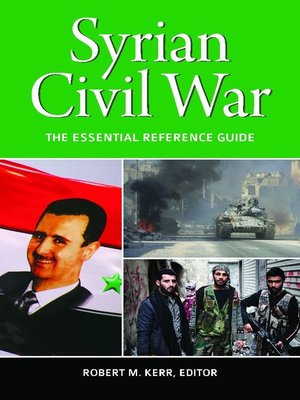 This invaluable resource provides students with a comprehensive overview of the Syrian Civil War, with roughly 100 in-depth articles by leading scholars on an array of key topics, and several important primary source documents.

This important work provides a thorough introduction to the origins, events, and impact of the devastating Syrian Civil War, illuminating the complexities and the consequences of this long-lasting conflict. From the emergence of the war in early 2011 following the Arab Spring that swept across the Middle East, to the rise of the Islamic State (ISIS), through the re-establishing of control of most of the country by Syrian president Bashar al-Assad's armed forces by late 2018, this comprehensive work covers every aspect of this conflict that has devastated millions.

The book begins with a detailed overview of the Syrian Civil War that provides context to each of the reference entries that follow. The introductory material also includes essays on the causes and consequences of the war. Next comes the A–Z reference entries on such topics as Bashar al-Assad, chemical weapons, the refugee crisis, the Battle of Saraqeb, and White Helmets. In addition, the book includes about a dozen curated and contextualized primary source documents along with a comprehensive chronology and an extensive bibliography.