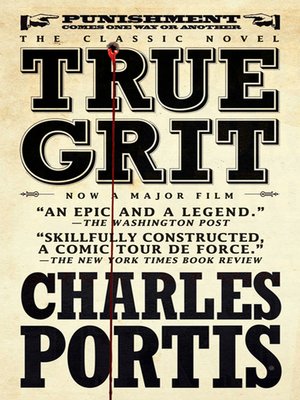 View more libraries...
Charles Portis has long been acclaimed as one of America's foremost writers. True Grit is the basis for two movies, the 1969 classic starring John Wayne and the Academy Award® winning 2010 version starring Jeff Bridges and written and directed by the Coen brothers.

True Grit tells the story of Mattie Ross, who is just fourteen years of age when a coward going by the name of Tom Chaney shoots her father down in Fort Smith, Arkansas, and robs him of his life, his horse, and $150 in cash. Mattie leaves home to avenge her father's blood. With the one-eyed Rooster Cogburn, the meanest available U.S. Marshal, by her side, Mattie pursues the homicide into Indian Territory. True Grit is eccentric, cool, straight, and unflinching, like Mattie herself. From a writer of true status, this is an American classic through and through.

This mass-market edition includes an afterword by award-winning Donna Tartt, author of The Little Friend and The Secret History.