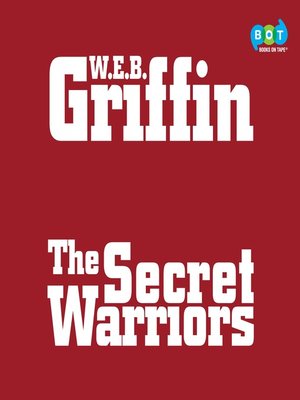 View more libraries...
2nd in the Men at War series
Griffin's millions of fans cheered the rediscovery of THE LAST HEROES, the first volume of Men at War, his saga of the OSS during World War II. It is 1942 when THE SECRET WARRIORS begins. In Washington, D.C., the OSS, under FDR and "Wild Bill" Donovan, escalates its tactical war, and plunges into worldwide covert operations. In London, a difficult and exiled de Gaulle disrupts invasion plans, and it is up to the OSS to force the General's hand. In the Belgian Congo, a desperate air maneuver drops OSS agents into Africa, with the aim of smuggling out uranium ore essential to the arms race. And in Morocco, OSS men plan a rendezvous with anti-Nazi Germans in an attempt to obtain critical weapons secrets.
"THE SECRET WARRIORS is further proof that Griffin rates among the best storytellers in any genre." (Phoenix Gazette)
From the Cassette edition.