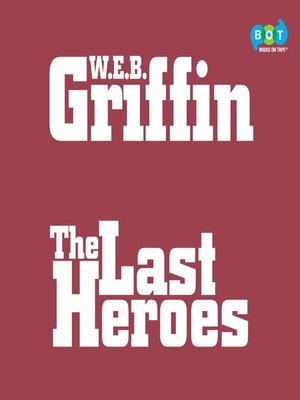 View more libraries...
(1st in "Men at War" series)
W.E.B. Griffin's immensely popular military series "The Corps" and "Brotherhood of War" have won him millions of fans. Every one of them will cheer the rediscovery of his saga of battle and espionage in this first of the series, "Men at War." In THE LAST HEROES, it is June 1941. Europe has been at war for almost three years, and Franklin Roosevelt and "Wild Bill" Donovan build the most complex espionage organization in history: the Office of Strategic Services. Young and daring, the handpicked members of the OSS assemble under a thin camouflage of diplomacy. Dispersing throughout the world, they conduct operations that may affect the entire outcome of the war. No operation is more critical than the one conducted by hotshot pilot Richard Canidy and his half-German wild-card friend Eric Fulmar: to secure the rare ore that will power a top-secret weapon — the atomic bomb.
"W.E.B. Griffin rates among the best storytellers in any genre." (Phoenix Gazette)
From the Cassette edition.