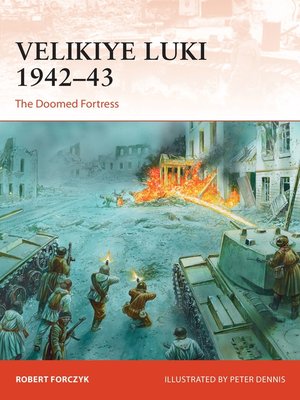 View more libraries...
Velikiye Luki had been an important Russian fortress city since the 13th century and had become an important rail-hub by the 19th century. In August 1941, the Germans occupied the city of 30,000 during Operation Barbarossa and made it a bulwark on the boundary between Heeresgruppe Nord and Heeresgruppe Mitte. In the winter of 1942–43, while Soviet forces were encircling Stalingrad, the Stavka (High Command) conducted a simultaneous offensive to isolate and destroy the 7,500-man German garrison in Velikiye Luki. After surrounding the city on 27 November 1942, the Soviet 3rd Shock Army gradually reduced the city to rubble, while the German garrison, sustained by Luftwaffe air lifts, hunkered down in the medieval city and awaited rescue.

This illustrated title reveals the full story of the tense seven-week siege of Velikiye Luki, which saw Soviet forces striving to liberate the city in the face of a determined garrison and fierce relief efforts. Detailed analysis by renowned World War II historian Robert Forczyk is complimented by stunning and historically accurate battlescenes, maps, and bird's-eye-views to offer a comprehensive look at this gripping campaign.