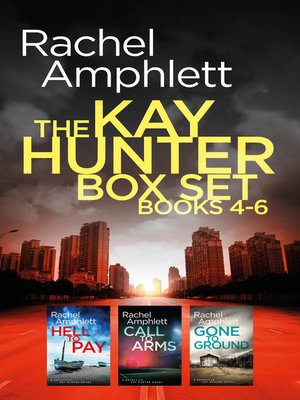 "Rachel Amphlett is a master of misdirection!" - Waterstones

Here's what you get in the box set:

With her enemies unmasked and her career spiralling out of control, Kay's determination to seek vengeance for the victims brings her dangerously close to those who want to silence her.

Undeterred, she uncovers the real reason behind a plot to destroy her career and sets in motion a terrifying chain of events.

Could Kay's need for revenge be her undoing, or will she survive to see justice served?

Hell to Pay is a gripping fast paced crime thriller, and the fourth in the Detective Kay Hunter series.

Loyalty has a price.

Kay Hunter has survived a vicious attack at the hands of one of the country's most evil serial killers.

Returning to work after an enforced absence to recover, she discovers she wasn't the only victim of that investigation. DI Devon Sharp remains suspended from duties, and the team is in turmoil.

Determined to prove herself once more and clear his name, Kay undertakes to solve a cold case that links Sharp to his accuser.

But, as she gets closer to the truth, she realises her enquiries could do more harm than good.

Torn between protecting her mentor and finding out the truth, the consequences of Kay's enquiries will reach far beyond her new role...

Call to Arms is a fast-paced murder mystery, and the fifth in the Detective Kay Hunter series.

While attending a crime scene on the outskirts of Maidstone, DI Kay Hunter makes a shocking discovery.

The victim has been brutally cut to pieces, his identity unknown.

When more body parts start turning up in the Kentish countryside, Kay realises the disturbing truth – a serial killer is at large and must be stopped at all costs.

With no motive for the murders and a killer who has gone undetected until now, Kay and her team of detectives must work fast to calm a terrified local population and a scornful media.

When a third victim is found, her investigation grows even more complicated.

As she begins to expose a dark underbelly to the county town, Kay and her team are pulled into a web of jealousy and intrigue that, if left unchecked, will soon claim another life.

Gone to Ground is a gripping serial killer thriller full of page-turning suspense, and the sixth book in the Detective Kay Hunter series to date:

Books 1-3 are available in a separate box set collection.