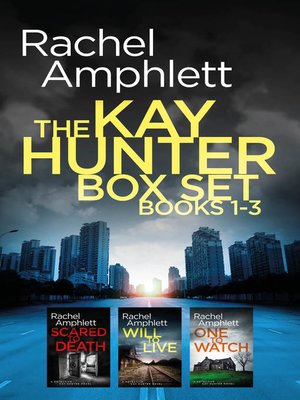 Download books 1-3 in the bestselling Detective Kay Hunter series in one box set of edge of your seat crime thrillers!

Here's what you get in the box set:

When a packed commuter train runs over a body on a stretch of track known to locals as 'Suicide Mile', it soon transpires that the man was a victim of a calculated murder.

As the investigation evolves and a pattern of murders is uncovered, Detective Sergeant Kay Hunter realises the railway's recent reputation may be the work of a brutal serial killer.

With a backlog of cold cases to investigate and attempting to uncover who is behind a professional vendetta against her, Kay must keep one step ahead of both the killer and her own adversaries.

When a second murder takes place within a week of the first, she realises the killer's timetable has changed, and she's running out of time to stop him...

Detective Kay Hunter and her colleagues are shocked by the vicious murder of a teenage girl at a private party in the Kentish countryside. A tangled web of dark secrets is exposed as twisted motives point to a history of greed and corruption within the tight-knit community.

Confronted by a growing number of suspects and her own enemies who are waging a vendetta against her, Kay makes a shocking discovery that will make her question her trust in everyone she knows.

One to Watch is a gripping murder mystery thriller, and the third in the Detective Kay Hunter series.

Books 4-6 are available in a second box set collection.

What people are saying about Detective Kay Hunter

"Thrilling start to a new series. Scared to Death is a stylish, smart and gripping crime thriller" Robert Bryndza, USA Today bestselling author of The Girl In The Ice

"One of the top crime thriller series out there! If you like your crime thrillers with a twist of psychological suspense and a smattering of procedure and a hint of hostility and grudges, then Will to Live is one for you!" Chapter In My Life

"[One to Watch has] shades of Dame Agatha ...matched the feel of a Golden Age crime story" Grab This Book