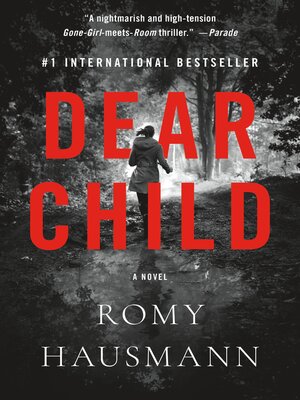 "[A] tantalizingly disturbing debut...As enthralling as it is thought-provoking." -New York Times Book Review
Bustle Best Books of Fall 2020
Publishers Weekly Top 10 Mysteries & Thrillers of Fall 2020
She Reads Most Anticipated Books of Fall 2020
A woman held captive finally escapes—but can she ever really get away?

Gone Girl meets Room in this page-turning, #1 internationally bestselling thriller from one of Germany's hottest new talents
A windowless shack in the woods. A dash to safety. But when a woman finally escapes her captor, the end of the story is only the beginning of her nightmare.
She says her name is Lena. Lena, who disappeared without a trace 14 years prior. She fits the profile. She has the distinctive scar. But her family swears that she isn't their Lena.
The little girl who escaped the woods with her knows things she isn't sharing, and Lena's devastated father is trying to piece together details that don't quite fit. Lena is desperate to begin again, but something tells her that her tormentor still wants to get back what belongs to him...and that she may not be able to truly escape until the whole truth about what happened in the woods finally emerges.
Twisty, suspenseful, and psychologically clever, Romy Hausmann's Dear Child is a captivating thriller with all the ingredients of a breakout hit.
"Chilling, original and mesmerizing." —David Baldacci