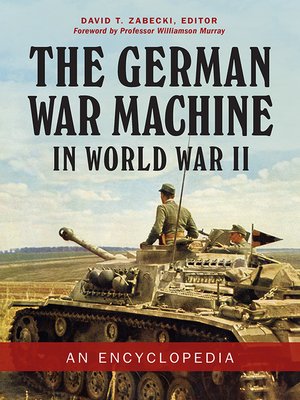 This invaluable resource offers students a comprehensive overview of the German war machine that overran much of Europe during World War II, with close to 300 entries on a variety of topics and several key primary source documents.

This book provides everything the reader needs to know about the German war machine that developed into the potent armed force under Adolf Hitler. This expansive encyclopedia covers the period of the German Third Reich, from January 1933 to the end of World War II in Europe, in May 1945. Dozens of entries on key battles and military campaigns, military and political leaders, military and intelligence organizations, and social and political topics that shaped German military conduct during World War II are followed by an illuminating epilogue that outlines why Germany lost World War II.

A documents section includes more than a dozen fascinating primary sources on such significant events as the Tripartite Pact among Germany, Italy, and Japan; the Battle of Stalingrad; the Normandy Invasion; the Ardennes Offensive; and Germany's surrender. In addition, six appendices provide detailed information on a variety of topics such as German aces, military commanders, and military medals and decorations. The book ends with a chronology and a bibliography of print resources.