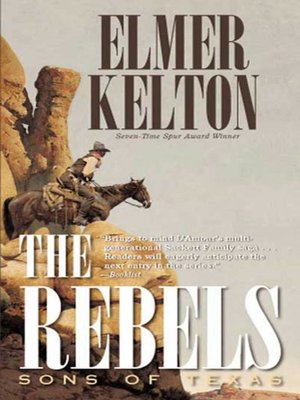 It is the mid 1830s and a growing flow of American pioneers into Mexican Texas has sown the seeds of revolution. In the midst of the turmoil are the Lewis brothers – Andrew, Michael, and James – scions of Mordecai Lewis, who crossed the Sabine River into Texas a decade past.

Now the news along the Texas frontier is of a young general, a self-styled "Napoleon of the West," named Antonio Lopez de Santa Anna, who wants to stamp out any gringo talk of independence from Mexico and oust the American interlopers from Texas.

Standing in opposition to Santa Anna is the former governor of Tennessee and veteran of Andrew Jackson's Indian battles, Sam Houston, who is gathering a volunteer army to meet the Mexican forces.

More about Elmer Kelton
The Rebels
Copy and paste the code into your website.
New here? Learn how to read digital books for free