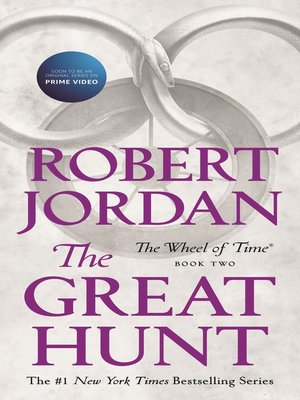 Since its debut in 1990, The Wheel of Time® by Robert Jordan has captivated millions of readers around the globe with its scope, originality, and compelling characters.

The Wheel of Time turns and Ages come and go, leaving memories that become legend. Legend fades to myth, and even myth is long forgotten when the Age that gave it birth returns again. In the Third Age, an Age of Prophecy, the World and Time themselves hang in the balance. What was, what will be, and what is, may yet fall under the Shadow.

For centuries, gleemen have told the tales of The Great Hunt of the Horn. So many tales about each of th Hunters, and so many Hunters to tell of...Now the Horn itself is found: the Horn of Valere long thought only legend, the Horn which will raise the dead heroes of the ages. And it is stolen.

By Robert Jordan and Amy Romanczuk
Patterns of the Wheel: Coloring Art Based on Robert Jordan's The Wheel of Time

More about Robert Jordan
The Great Hunt
Copy and paste the code into your website.
New here? Learn how to read digital books for free