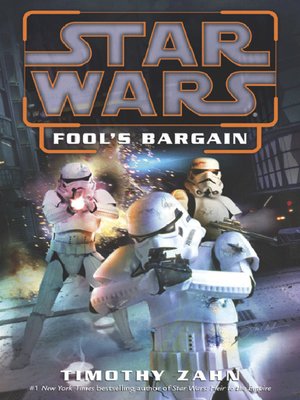 This novella includes an excerpt from the novel STAR WARS: SURVIVOR'S QUEST by Timothy Zahn and an interview with the author.

THE EMPIRE STRIKES A DEAL

The history of the planet Kariek has been one of seemingly endless violence-- thanks to the constantly erupting revolutions among the many divided tribes of the native Eickarie race battling for dominance. Yet none of these tribes has held sway since a mysterious Warlord and his legion of alien mercenaries seized power and began a fifty-year reign of terror.

Now, at last, the tide may be turning: the leaders of the warring Eickarie factions have forged an alliance--strong enough to capture a city and corner the Warlord and his minions in their fortress. And the post-Palpatine Empire of the Hand is lending support to this revolt against tyranny by deploying no less a fighting force than the Imperial 501st Legion of stormtroopers.

Once infamously known as "Vader's Fist," the legendary 501st are the best men for the dangerous objective at hand--capturing the Warlord alive. It's a risky mission that might be jeopardized when Imperial unit commander Twister and his comrades, Shadow, Cloud, and Watchman, are waylaid by a band of zealous freedom fighters, armed with their own agenda . . . and plenty of firepower. The Eickarie renegades--determined to free hundreds of their people from the Warlord's dungeons--have an offer to make, and a strategy that could give the Imperials the edge in the bloody showdown to come. But can Twister and his men trust their new allies? Or will they get more than they bargain for?

More about Timothy Zahn
Fool's Bargain
Copy and paste the code into your website.
New here? Learn how to read digital books for free