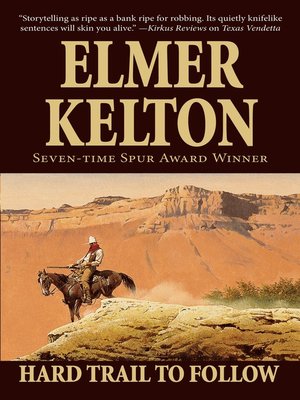 Former Texas Ranger Andy Pickard, called "Badger Boy" when he lived with Comanches as a child, is following the plow on West Texas land until he learns that his friend, Sheriff Tom Blessing, has been killed during a jailbreak. The escaped bank robbers are led by a man calling himself Cordell. Andy gets reinstated as a Ranger so he can catch Cordell and get justice for Tom Blessing.

Cordell is something of an enigma to Andy, especially since the pursuit slowly reveals that he is very likely not the killer of Tom Blessing. Even so, Cordell and his cohorts must be brought to Ranger justice first and the whodunit sorted out later.

More about Elmer Kelton
Hard Trail to Follow
Copy and paste the code into your website.
New here? Learn how to read digital books for free