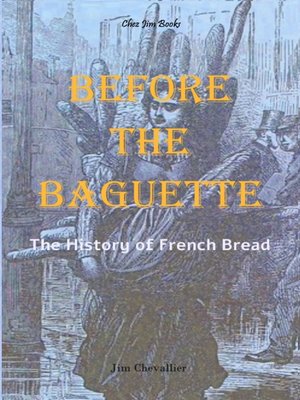 The History of French Bread

A history of French bread from the first Neolithic flat breads up to the baguette, and an overview of developments since.

French bread has been prized in other countries since medieval times and the baguette today is made all over Asia (even in North Korea!). Yet histories of this very influential bread are lacking; this new work attempts to fill in that gap.

After a look at the earliest breads in France, the work turns to the Roman breads which became, in simpler form, the first medieval breads, then the appearance of trade groups and regulated breads, followed by increasing documentation of the craft, before luxury breads and long breads appeared in the seventeenth century, creating a new variety in the loaves offered, greatly expanded in 1839 when August Zang introduced the croissant and Austrian methods into French baking. Meanwhile crow-bar length loaves became common in Paris, carried by women bread porters - porteuses de pain. A long list of breads was already noted at the start of the twentieth century, when the baguette is first mentioned (though barely noted at first). In the decades since, several older loaves and terms persisted even as the baguette became more common. But after World War II, complaints increased about the quality of French bread and both the government and bakers began to address the issue, more or less successfully, so that "traditional" style breads became more common along with celebrated artisanal bakers, even as the French have eaten less bread and automatic dispensers have replaced many rural bakeries.

Jim Chevallier is both a performer and a researcher, having worked as a radio announcer (WCAS, WBUR and WBZ-FM), acted (on NBC's "Passions", and numerous smaller projects) and published an essay on breakfast in 18th century France (in Wagner and H...

More about Jim Chevallier
Before the Baguette
Copy and paste the code into your website.
New here? Learn how to read digital books for free