The Presidency in Times of Crisis and Disaster 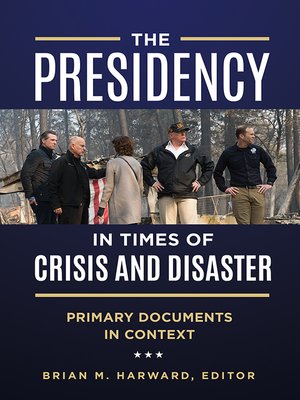 This resource uses primary documents and contextualizing essays to illuminate how America's presidents have responded to major tests of their leadership and approached their role and responsibilities in times of national crisis.

Presidents hold the attention of the public like no other political actor. In addition, because of their unique role in the constitutional system, presidents often take immediate, unilateral action in the face of national emergencies. Exploring key events, crises, and disasters through the lens of presidential responsiveness, this text reveals not only the larger historical context but also the authority of presidents in meeting the "felt necessities of the time," deepening readers' understanding of those touchstone events.

Comprehensive in temporal and topical scope, the book covers crises and disasters from the presidency of George Washington through Donald Trump's first two years in office. Important events covered include natural disasters, wars, assassinations, terrorist attacks, mass shootings, economic crises, riots, tragedies, and political scandals. Each event is explored through a primary document that reveals key dimensions of the presidential response to the crisis or disaster in question and contextual headnotes and essays that provide additional insights into the political, economic, and cultural contexts in which that event occurred and to which the president responded.

Politics Nonfiction
The Presidency in Times of Crisis and Disaster