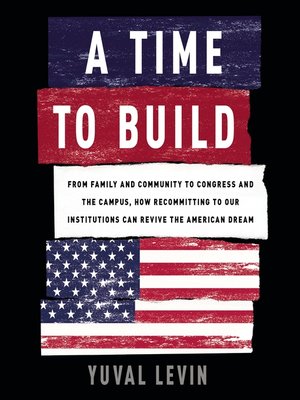 A Time to Build

From Family and Community to Congress and the Campus, How Recommitting to Our Institutions Can Revive the American Dream

PoliticsNonfiction
A leading conservative intellectual argues that to renew America we must recommit to our institutionsAmericans are living through a social crisis. Our politics is polarized and bitterly divided. Culture wars rage on campus, in the media, social media, and other arenas of our common life. And for too many Americans, alienation can descend into despair, weakening families and communities and even driving an explosion of opioid abuse. Left and right alike have responded with populist anger at our institutions, and use only metaphors of destruction to describe the path forward: cleaning house, draining swamps. But, as Yuval Levin argues, this is a misguided prescription, rooted in a defective diagnosis. The social crisis we confront is defined not by an oppressive presence but by a debilitating absence of the forces that unite us and militate against alienation.As Levin argues, now is not a time to tear down, but rather to build and rebuild by committing ourselves to the institutions around us. From the military to churches, from families to schools, these institutions provide the forms and structures we need to be free. By taking concrete steps to help them be more trustworthy, we can renew the ties that bind Americans to one another.
PoliticsNonfiction

Yuval Levin is the founder and editor of National Affairs and has written for the New York Times, Washington Post, and Wall Street Journal. His previous books include The Fractured Republic and The Great Debate. Levin was a member of the White Hou...

More about Yuval Levin
A Time to Build
Copy and paste the code into your website.
New here? Learn how to read digital books for free