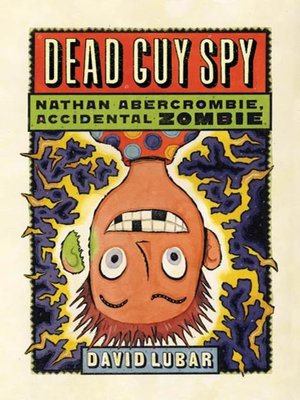 Nathan Abercrombie is getting used to his rotten life as a half-dead zombie. The good thing is he doesn't feel any pain. The bad thing is his body can't heal, so he has to be really careful not to break anything. But that's hard to do when his wrestling-obsessed gym teacher, Mr. Lomux, matches him up with Rodney the bully, who's looking for any excuse to break his bones.

Then one day, Nathan is approached by the secret organization B.U.M.—aka the Bureau of Useful Misadventures—which offers him a cure in exchange for his help. Nathan jumps at the chance to become the world's first zombie spy, but soon discovers that B.U.M. isn't quite what it seems. Can Nathan trust them?

David Lubar created a sensation with his debut novel, Hidden Talents, an ALA Best Book for Young Adults. Thousands of kids and educators across the country have voted Hidden Talents onto over twenty state lists. David is also the author of True Ta...

More about David Lubar
Dead Guy Spy
Copy and paste the code into your website.
New here? Learn how to read digital books for free