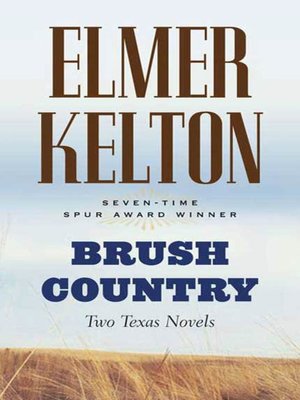 To Elmer Kelton, the brush country of southwest Texas is home. Nobody knows Texas's history, people, beauty, and dangers as well as this greatest of Western writers.

Barbed Wire, the first novel in this omnibus, is the story of one-time cowboy Doug Monahan, who runs a fencing crew outside the town of Twin Wells. Monahan, a likeable, hard-working Irishman, and his workers dig post-holes and string red painted barb wire for ranchers as protection against wandering stock, rustlers, and land hungry cattle barons.

Their fencing operation is opposed by Captain Andrew Rinehart, a former Confederate officer and an old-school open range cowman of the huge R Cross spread. With his brutal foreman, Archer Spann—who does the violent work of chasing squatters off the range—Rinehart wages a barb wire war against Doug Monahan.

A second colorful tale of the brush country is Llano River. Dundee, a onetime cowboy, one of Monahan's fencing crew in Barbed Wire, wanders into the town of Titusville, broke, tired, and itching for a fight. Town patriarch John Titus hires Dundee to find out who is rustling his cattle, but he already has a culprit in mind—Blue Roan Hardesty. Once a friend, now a sworn enemy of the powerful Titus clan, Hardesty is Titus's choice for villain—but Dundee is determined to find out the truth, even if it costs him his job.

Elmer Kelton (1926-2009) was the award-winning author of more than forty novels, including The Time It Never Rained, Other Men's Horses, Texas Standoff and Hard Trail to Follow. He grew up on a ranch near Crane, Texas, and earned a journalism degr...

More about Elmer Kelton
Brush Country
Copy and paste the code into your website.
New here? Learn how to read digital books for free