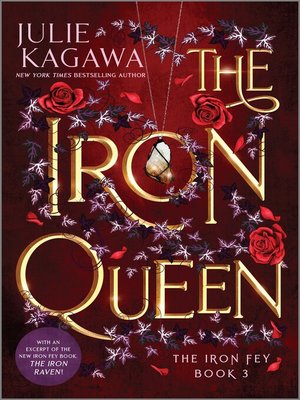 View more libraries...
Wicked faeries, betrayals and forbidden love... This special edition of The Iron Queen includes the bonus novella Summer's Crossing and an excerpt from the new book in the New York Times international bestselling the Iron Fey series, The Iron Raven.
A storm is approaching, an army of Iron fey that will drag me into the core of a conflict so powerful, I'm not sure anyone can survive it.
Meghan Chase thought her time with the fey was over, that the sacrifices she had to make were done. But war is brewing as another Iron King rises to destroy the courts of Faery and corrupt the Nevernever forever. The age-old rivalry of the Summer and Winter courts must be put aside as the rulers prepare to face their mutual enemy...and Meghan must step up once more and finally claim her secret destiny. But first, she must make one final, heartbreaking sacrifice.
THE IRON FEY:
The Iron King
The Iron Daughter
The Iron Queen
The Iron Knight
The Iron Prince
The Iron Traitor
The Iron Warrior
THE IRON FEY: EVENFALL
The Iron Raven
The Iron Sword
Novellas:
Shadow's Legacy (Evenfall #0.5)