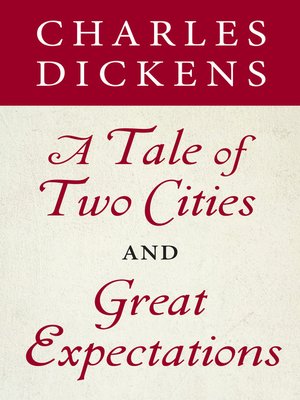 Contains an afterword by Stephen Koch.

With his sublime parting words, "It is a far, far better thing that I do, than I have ever done..." Sidney Carton joins that exhalted group of Dickensian characters who have earned a permanent place in the popular literary imagination. His dramatic story, set against the volcanic fury of the French Revolution and pervaded by the ominous rumble of the death carts trundling toward the guillotine, is the heart-stirring tale of a heroic soul in an age gone mad. A masterful pageant of idealism, love, and adventure — in a Paris bursting with revolutionary frenzy, and a London alive with anxious anticipation — A Tale of Two Cities is one of Dickens's most energetic and exciting works.

Great Expectations
Contains an introduction by John Irving.
In the marshy mists of a village churchyard, a  tiny orphan boy named Pip is suddenly terrified by a  shivering, limping convict on the run. Years  later, a supremely arrogant young Pip boards the coach  to London where, by the grace of a mysterious  benefactor, he will join the ranks of the idle rich  and "become a gentleman." Finally, in the  luminous mists of the village at evening, Pip the  man meets Estella, his dazzingly beautiful  tormentor, in a ruined garden—and lays to rest all the heartaches and illusions that his "great  expectations" have brought upon him. Dickens's  biographer, Edgar H. Johnson, has said that—except for the author's last-minute tampering with his original ending—Great Expectations  is "the most perfectly constructed and perfectly written of all Dickens's works." In John  Irving's Introduction to this edition, the  novelist takes the view that Dickens's revised ending is "far more that mirror of the quality of trust in  the novel as a whole." Both versions of the ending are printed here.