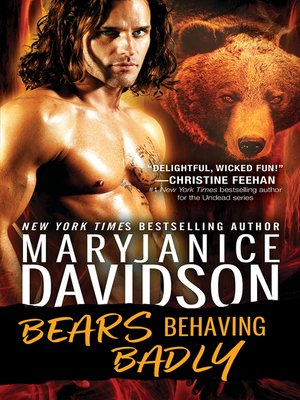 "Davidson is in peak form in this hilarious, sexy, and heartfelt paranormal romance"— Booklist, STARRED review

Annette Garsea is the fiercest bear shifter the interspecies foster care system has ever seen. She fights hard for the safety and happiness of the at-risk shifter teens and babies in her charge—and you do not want to get on the wrong side of a mama werebear. Handsome, growly bear shifter PI David Auberon has secretly been in love with Annette since forever but he's too shy to make a move. All he can do is offer her an unlimited supply of Skittles and hope she'll notice him.

She's noticed the appealingly scruffy PI (and his sugar fixation), all right, but solitary bears make her nervous, and the man's barely ever said more than five words to her... Until the night they risk everything to rescue a were-baby and bring down a hideous bad guy. Dodging unidentified enemies puts them in a tight spot. Very tight. Together. Tonight. Oh...like that, is it?

There's no looking back now...