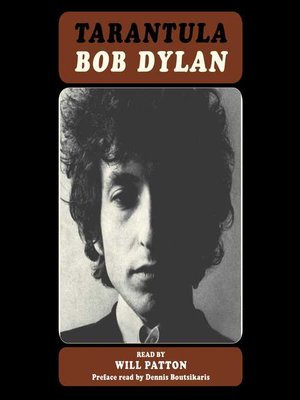 FictionPoetry
Never before on audio! Music legend Bob Dylan's only work of fiction—a combination of stream-of-consciousness prose, lyrics, and poetry that illuminates the creative process of one of the most influential musicians and songwriters of our time—finally comes to audio in a magnificent performance by award-winning narrator Will Patton!
Written in 1966, Tarantula is a collection of poems and prose that evokes the turbulence of its time and provides a unique perspective on Bob Dylan's creative evolution. It captures Dylan at a crucial juncture in his artistic development, showcasing the imagination of a revolutionary musician who was able to combine the humanity and compassion of his folk music roots with the surrealism of modern art and the intensity of the Delta blues. Angry, funny, and elusive, the poems and prose in this collection reflect the concerns found in Dylan's most seminal music: a sense of protest, verbal ingenuity and spontaneity, and a belief in the artistic legitimacy of chronicling everyday life and the rhythms of the street and in the air.
FictionPoetry

Bob Dylan has released thirty-eight studio albums, which collectively have sold over 120 million copies around the world. He won the Nobel Prize in Literature and has been awarded the French Legion of Honor, a Pulitzer Prize Special Citation, and ...

More about Bob Dylan
Tarantula
Copy and paste the code into your website.
New here? Learn how to read digital books for free