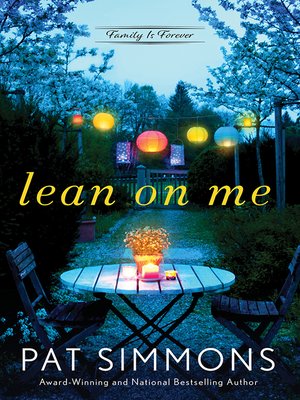 First in an emotional African American Christian romance from acclaimed inspirational author Pat Simmons featuring a tender-hearted heroine who puts her family first and a misguided hero who needs a little nudge to realize that sometimes all you have to do is believe.

No one should have to go it alone...

Tabitha Knicely believes in family before everything. She may be overwhelmed caring for her beloved great-aunt, but she would never turn her back on the woman who raised her, even if Aunt Tweet's dementia is getting worse. Tabitha is sure she can do this on her own. But when Aunt Tweet ends up on her neighbor's front porch, and the man has the audacity to accuse Tabitha of elder abuse, things go from bad to awful.

Marcus Whittington feels a mountain of regret at causing problems for Tabitha and her great-aunt. How was he to know the frail older woman's niece was doing the best she could? As Marcus gets to know Aunt Tweet and sees how hard Tabitha is fighting to keep everything together, he can't walk away from the pair. Particularly when helping Tabitha care for her great-aunt leads the two of them on a spiritual journey of faith and surrender.